In it’s first year running the BCP Pro Circuit Honda Junior Development Team have dominated proceedings in the 250cc 13 to under 15 years National Championship by filling the top two steps on the podium. Taj Marshall proved to be unstoppable and literally in a league of his own, winning three of the five races and topping the points tally by over 25 points from his closest rival. The Victorian gun holeshot two of the five races and consistently had lap times two to three seconds a lap faster than anyone.

“The week went really smoothly for us,” said Marshall. “The bike was perfect and just made my job so much easier. We have the fastest and best handling 250’s on the track! I’d really like to thank my mum and dad, Timmy from Eight11 who built our bikes and Lee for putting together the team and backing me all the way. We walk the track together, go to the line together, figure out lines and passing opportunities, and basically just clown around the rest of the time. It is such a relaxed atmosphere. I’d also like to thank all of our sponsors and supporters who back the team and make it all possible. We have the best companies behind us and I’m just so stoked that I could repay them with a championship.”

Securing second place in the championship was Kiwi and fellow BCP Pro Circuit Honda rider Trent Collins who impressed all week with his consistency and gritty determination. Like his team mate, Collins also scored himself two holeshots and featured in the top five in all five finals. Collins started off with two fifth placings, then a fourth, followed by a third in the penultimate race. But it was his last race holeshot and win that leap frogged him from fifth to second place in the championship, securing the team’s fairytale ‘one-two’ finish for the week.

“I can’t begin to explain how good this week has been. It has literally been the best week of my life,” said an ecstatic Trent Collins.

“The engine on these BCP race bikes are up about 5 or 6 horsepower from our race bikes back home so it took a bit of getting used to and we played around a lot with gearing, but once I got used to the extra power this bike was amazing. We started with our suspension from back home but before race one I tried Tim’s Eight11 stuff and we ran it the whole week which was a good move. I really want to thank Lee for believing in me enough to bring me all the way over from NZ without even seeing me ride. He runs the team really well and just lets us do our thing, but having someone like him there for line selection and just keeping a calm atmosphere when the pressure is on helps so much. I can’t thank my dad enough for everything he does for me and also my family back home. I’d also like to thank Tim Vare for everything he does for the team along with all of our sponsors.”

Morgan Fogarty had a tough week at the office but dug deep like he always does. Fogarty featured up in the top 4 all week long on the CRF150R but suffered from arm pump and numbness in the hands. The final race of the week was a highlight for Fogarty as he holeshot and pulled away from the rest of the field each lap before a mechanical DNF would retire him from the race while sitting in first place with less than a lap to go.

“It was just one of those weeks,” said Fogarty.

“We qualified second fastest on the 150 and holeshot the first moto but I just pumped up so quickly and dropped back to 4th place. I tried everything to turn the week around but it just wasn’t to be. We’ve had a great year on the little 150R and won a bunch of races and I so wanted to top it off with a championship but we will move forward and learn from the week.”

Team manager Lee Hogan was over the moon with the team and their efforts.

“It’s been a really good first year for us and I really need to thank Glyn Griffiths from Honda for believing that we could put Honda back on the map. I also need to thank Tim Vare for everything he does, from the bike prep and the awesome engine/suspension package, to the training and mentoring of the boys that he helps me with. The admiration that I have for Taj Marshall is enorgmous! To see where he has come from last year to the polished rider that he is today is mind blowing. Well done on your championship. And Trent Collins really impressed me with his ‘no fuss’ way of getting the job done. Him and his father are one of the best combinations I’ve seen in a long time. Morgan Fogarty is all heart and only knows how to give it 100%. He’ll bounce back with a vengeance.”

The BCP Pro Circuit Honda Junior Development Team are moments away from announcing their 2016 rider lineup. 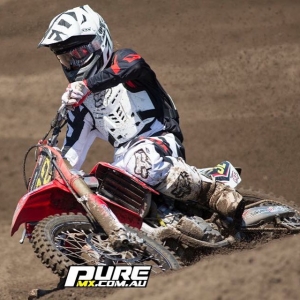