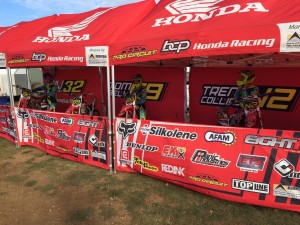 Round 2 of the Victorian Junior Motocross Championships were held over the weekend at the Shipwreck Coast Motorcycle Club near Warrnambool, Victoria. The event once again attracted some of the best juniors in the country as riders from each and every state flocked to the garden state to test themselves against the Victorian riders.

In his first Australian race for 2016 under the BCP Pro Circuit Honda squad New Zealand rider Trent Collins impressed greatly after a runaway 10 second win in moto one of the A grade 250cc class.

Moto two started off well for Collins in third place exiting turn one but when Western Australia’s Caleb Grothues crashed in front of him in turn two leaving nowhere to go, the kiwi had to re-start in last place. A spirited charge through the pack saw Collins finish in fifth place by the time the chequered flag had waved.

The final moto of the day was a good one for Trent Collins who after starting in fourth place, quickly moved into third in the opening laps before reeling in current state champion Cody Dyce and making the pass. Collins quickly pulled a gap on Dyce but by this time a hard charging Callum Norton had pulled away to a sizeable gap.

The win in moto one combined with his fifth and a second place in the final moto would give Trent Collins a solid second place overall on the day. The same result he secured at last year’s National Junior Motocross Championships in Bunbury, WA.

“I’m really happy to have had a good first race here in Australia,” said Collins.

“We had a week over here in Australia prior to this event and it was great to spend that time with Lee Hogan and Tim Vare. We made improvements every day and I’m really looking forward to the next round in a month’s time.”

Reigning National Junior champ Taj Marshall showed flashes of brilliance throughout the day but a first turn crash once again hurt his points tally and hurt his arm in the process.

Coming from last place in moto one Marshall made his way up to 7th by the end of the race. Moto two was the highlight of the day for the number 32 Honda rider with a second place start, and after a good battle with Cody Dyce for the first half of the race Marshall would pull a slight gap and hold second place until the chequered flag.

The final moto of the day was looking to be another good ride for Marshall who was sitting one spot behind his team mate Trent Collins and looking fast before a high-side crash would halt the Victorian’s momentum.

A bruised and battered Marshall would end up fifth place on the day and currently holds down fourth place in the Championship.

“I’m happy with my speed and the bike is awesome,” said Marshall.

I just need to get these crashes out of the way because these boys we are racing against are fast and consistent. We’ll keep moving forward and give it our best shot at Round three.”

Tom Bell had the duties of juggling both the CRF150R and CRF250R events on the same day which is no easy task. However the Rosebud boy made progress from round 1 with his riding and with some improved starts will find himself right there in the mix on the 150.

Bell currently sits 4th place in the Championship on board his CRF150R. And 10th place on board the 250.

“Today wasn’t the best for me results wise but there’s some real positives gained from this weekend,” said Bell.

“I just need to find my momentum that I had through the Christmas period and I can feel it coming.”

The Victorian State Motocross Championships head next to Ararat in western Victoria on the 7th and 8th May.